Anything you can do in Python can be done in a Pipedream Workflow. This includes using any of the 350,000+ PyPi packages available (opens new window) in your Python powered workflows.

Python steps are available in a limited alpha release.

However, you can't delay or retry steps, or take advantage of other features available in the Node.js environment at this time. If you have any questions please contact support (opens new window).

A new Python Code step will have the following structure, with a handler method and a pd argument passed into it:

The handler method is called during the step's execution, and the pd object contains helper methods to use Data Stores and make authenticated API requests to apps.

You can use print at any time in a Python code step to log information as the script is running.

The output for the print logs will appear in the Results section just beneath the code editor. 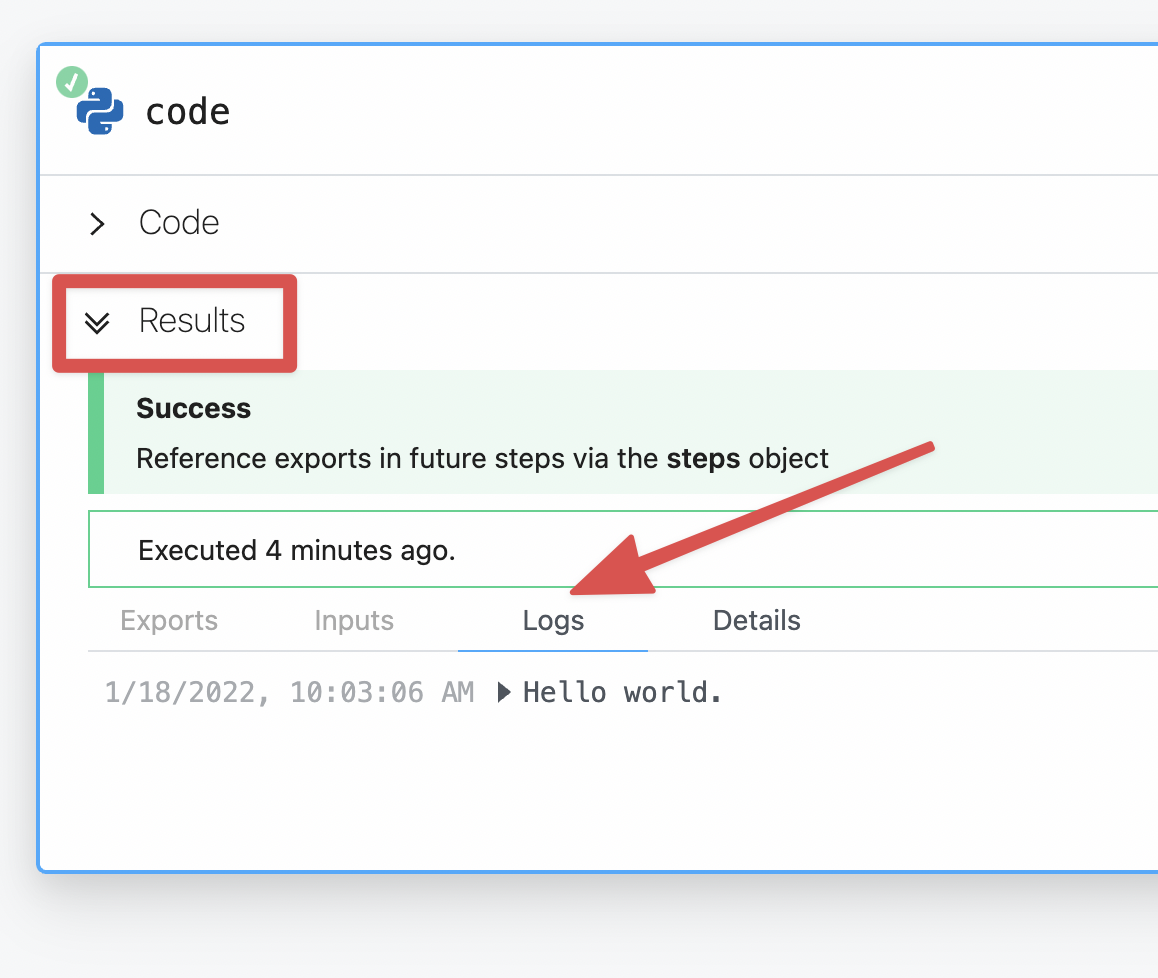 You can use any packages from PyPi (opens new window) in your Pipedream workflows. This includes popular choices such as:

To use a PyPi package, just include it in your step's code:

No need to update a requirements.txt or specify elsewhere in your workflow of which packages you need. Pipedream will automatically install the dependency for you.

# If your package's import name differs from its PyPI package name

Pipedream's package installation uses the pipreqs package (opens new window) to detect package imports and install the associated package for you. Some packages, like python-telegram-bot (opens new window), use an import name that differs from their PyPI name:

Use the built in magic comment system to resolve these mismatches:

No need to run pip install, just import requests at the top of your step's code and it's available for your code to use.

# Making a GET request

GET requests typically are for retrieving data from an API. Below is an example.

You can also send files within a step.

An example of sending a previously stored file in the workflow's /tmp directory:

You can return HTTP responses from HTTP-triggered workflows using the pd.respond() method:

Please note to always include at least the body and status keys in your pd.respond argument. The body must also be a JSON serializable object or dictionary.

Unlike the Node.js equivalent (opens new window), the Python pd.respond helper does not yet support responding with Streams.

A step can accept data from other steps in the same workflow, or pass data downstream to others.

# Using data from another step

In Python steps, data from the initial workflow trigger and other steps are available in the pd.steps object.

In this example, we'll pretend this data is coming into our workflow's HTTP trigger via POST request.

In our Python step, we can access this data in the exports variable from the pd.steps object passed into the handler. Specifically, this data from the POST request into our workflow is available in the trigger dictionary item.

# Sending data downstream to other steps

To share data created, retrieved, transformed or manipulated by a step to others downstream call the pd.export method:

Now this pokemon data is accessible to downstream steps within pd.steps["code"]["pokemon"]

You can only export JSON-serializable data from steps. Things like:

You can leverage any environment variables defined in your Pipedream account in a Python step. This is useful for keeping your secrets out of code as well as keeping them flexible to swap API keys without having to update each step individually.

Or an even more useful example, using the stored environment variable to make an authenticated API request.

If an particular service requires you to use an API key, you can pass it via the headers of the request.

This proves your identity to the service so you can interact with it:

There are 2 different ways of using the os module to access your environment variables.

os.environ['ENV_NAME_HERE'] will raise an error that stops your workflow if that key doesn't exist in your Pipedream account.

Whereas os.environ.get('ENV_NAME_HERE') will not throw an error and instead returns an empty string.

If your code relies on the presence of a environment variable, consider using os.environ['ENV_NAME_HERE'] instead.

You may need to exit a workflow early. In a Python step, just a raise an error to halt a step's execution.

All exceptions from your Python code will appear in the logs area of the results.

Sometimes you want to end your workflow early, or otherwise stop or cancel the execution of a workflow under certain conditions. For example:

In any code step, calling pd.flow.exit() will end the execution of the workflow immediately. No remaining code in that step, and no code or destination steps below, will run for the current event.

You can pass any string as an argument to pd.flow.exit():

Or exit the workflow early within a conditional:

You can also store and read files with Python steps. This means you can upload photos, retrieve datasets, accept files from an HTTP request and more.

The /tmp directory is accessible from your workflow steps for saving and retrieving files.

You have full access to read and write both files in /tmp.

# Writing a file to /tmp

# Reading a file from /tmp

You can also open files you have previously stored in the /tmp directory. Let's open the python-logo.png file.

If you need to check what files are currently in /tmp you can list them and print the results to the Logs section of Results:

The /tmp directory does not have unlimited storage. Please refer to the disk limits for details.