Now, with $.flow.rerun in Pipedream workflows, you can leverage the Shopify Bulk Operation API to perform big data queries in one workflow with ease.

The Shopify Bulk Operations API is a special job running API. It allows you to perform huge data queries via GraphQL without being limited by pagination.

However, the more difficult part of using this API is that you have to poll Shopify to ask for the current status of the job. This is because a job could take several minutes or even longer, depending on the amount of data you're asking for.

Thanks to the new $.flow.rerun in Node.js code steps, you can now poll Bulk Operations in the same workflow invocation. 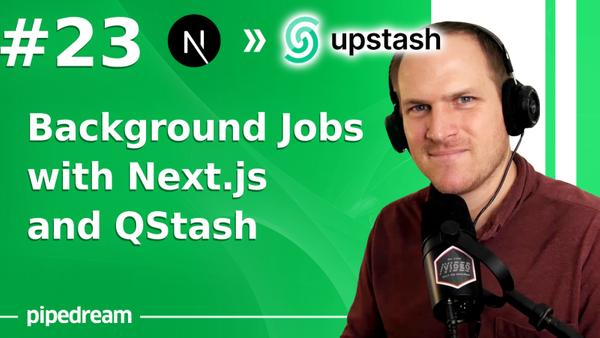 Learn how to add Background Job Processing to a Next.js site using QStash. QStash offers background job processing as a service over an HTTP API.

Airtable and Next.js are like the chocolate and peanut butter of JAMstack. Leverage static site generation and spreadsheet-as-a-db with Pipedream.

Here's a contact form component you can use in your Next.js project hosted on Vercel - without using a Next.js API route! We'll use an HTTP request from our Next.js frontend to trigger a Pipedream workflow to notify us on new contact form submissions. Adding a Contact